When you record an album, you get to choose the songs which will go in it.  For this first one, my criteria was pretty simple: I chose things I like.  My musical tastes are pretty wide-ranging (you can find rap and country in my iTunes library, right up next to all those classical pieces), but I tend to gravitate toward piano pieces which express emotion.  I like to play songs which have good lyrics.  Though I cannot sing*, I think about the words as I play the song and try to communicate the message. “Speak, O Lord” begins the album because it expresses my desire to be open to God’s teaching.  In addition, the arrangement is just the best!

*Trust me on this.  I have to remind myself not to sing along with the choir as I direct, lest the Facebook livestream of the church service lose viewers. 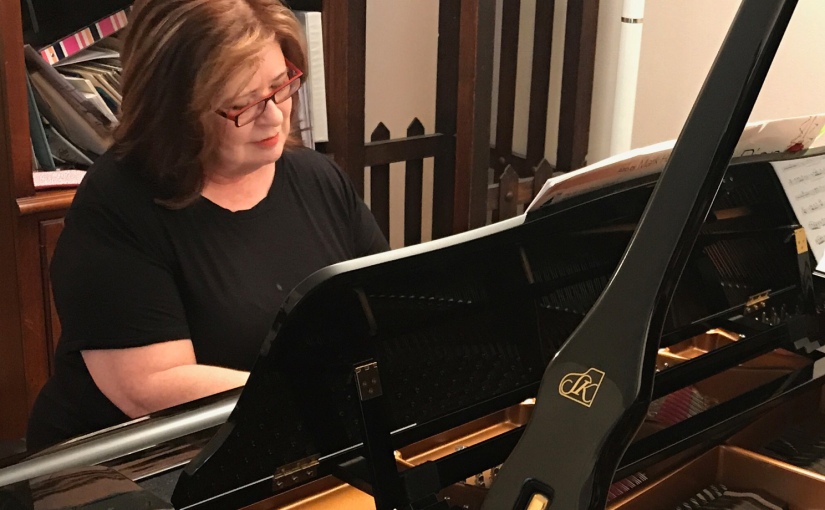 Four years ago, my husband and I went out for a leisurely Saturday breakfast.  Sitting over pancakes and coffee, he asked me what I planned to do that day.  “I’m going to buy a grand piano,” I said.  To his credit, he didn’t spit out his coffee like the person at the next table did, overhearing us.  Bob asked how I intended to pay for it, I told him, and after picking up some music at home, off we went.

I already knew what sort of piano I wanted, and about how much it would cost.  I knew why I wanted it: I’ve always wanted a grand piano, and my 60th birthday loomed.  “I’m not getting any younger,” I said.  “If I wait much longer, I won’t have much time to enjoy it.”  My dream piano would be at least a six-footer, shiny black, with a bright tone that sounded like bells.  I had always loved Kawai pianos, so that was our first stop.

In the store, I sat down at a model which looked like a good candidate.  It was the right length, and the price was just about what I thought it should be. It was nice, but the salesman thought I should play several more, especially one in particular.  I fiddled around on other instruments in the showroom, then he ushered me into the empty recital hall.  I sat on the bench in front of a Shigeru Kawai SK-6 and fell in love.

From the first notes, I knew that this one was mine.  It was responsive, the touch was just right, the tone sounded like angels singing.  I played the whole song.  At the end, there was applause.  The front two rows were filled with retirees who were arriving for their group organ lesson.  I hadn’t even noticed them come in.  I stood up and looked for the price tag. I was crushed—I didn’t know that pianos could cost that much, at least not the ones that weren’t 9-foot Steinways destined for Lincoln Center.  I tried to put that particular instrument out of my mind—it was so far over my budget there was no point in dreaming.

The salesman and my husband (who already knew that the budget was about to go out the window) took me to the wonderful piano’s little sister.  It was nice.  It was the right size, the right finish, the right touch, and only twice my budget. When I played it, though, it sounded like a really good operatic soprano—not angels.  I was happy, but not ecstatic.  However, Shigeru Kawai pianos come with a set-up by one of their awesome piano technicians, and the salesman assured us that the technician could voice the piano to reproduce those singing angels.  I put money down to hold it, and we left.

Over the next week, I played lots of pianos.  Yamahas, Steinways, Baldwins, Bosendorfers, Kawais, Shigeru Kawais—you name it.  If there was a piano in the city I thought would be comparable, I played it. I took a student with me to listen.  At the end of the quest, the student told me which one he preferred for himself, and then said that the Shigeru SK-6 that I loved just sang when I played it.  All other pianos just hummed.

That afternoon I had a chat with the music store manager about financing and delivery dates.  I told him I would have the money for the piano by the weekend, but the piano I really wanted was the beautiful SK-6 in the recital hall.  He said he’d see what he could do.  Fifteen minutes later, he called and said that he wanted to be sure I was sitting down and had a pencil.  I was, and I did.  He said the store owners had agreed to sell me the angels’ piano for only $3000 more than I would pay for the smaller one.  After I recovered from my faint, I called my husband, who again did not flinch (a strong man, that one). He said, “I guess you’ll be dropping by the music store on the way home, then.” Yup.  That’s exactly what I did, and within two weeks the amazing piano was sitting in my living room.  We call it TOM, short for “The Other Man.”

I play it for hours nearly every day. It still sounds like angels.  In fact, the first time people hear it, the reaction is usually tears. My dream is to let everyone hear TOM, and now I’ve made a recording.  Watch this space to see how you can hear him, too. Public service warning:  Sit down, and keep a tissue handy.  You might need one.